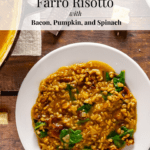 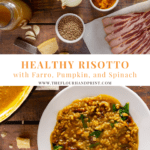 Farro risotto is a delicious, healthy risotto alternative to a traditional white rice recipe. Whole grain risotto made with wholesome ingredients like pumpkin, spinach, and just enough bacon to add a punch of flavor is a fantastic comforting recipe that’s healthier, while still feeling indulgent.

My husband and I have always eaten pretty well I think. But we’re also BIG believers in enjoying life, and that often applies to food. We like our cheeseburgers! Risotto, is one of those indulgences for me. Creamy rice, butter, and Parmesan cheese. YUM.

But when possible, I do try to make changes to healthier options, especially if I can do it without sacrificing flavor! The solution is a fantastic healthy risotto recipe made with whole grains, pumpkin puree, spinach, and just a touch of bacon for a punch of flavor. Farro risotto is going to be you’re new favorite healthy indulgence!

So What is Risotto?

If you’ve never had risotto before you need to. It’s traditionally a rice dish, made using a method that encourages the rice to give up its starch and create its own sauce.

This is done by adding small amounts of hot cooking liquid to rice in a wide, open pan. The liquid is stirred until absorbed, creating friction that evenly releases starch from the grains, that creates a thickened sauce over time. Cooking in an open pan allows the liquid to evaporate as well, meaning you use more liquid than you traditionally would when cooking a grain.

While Arborio, or medium grain white rice is the traditional choice, this method can be applied to other grains. I actually find farro to be a forgiving choice. It’s hardy, and has a natural chew that resists overcooking. To enhance the creaminess that is somewhat lost by not using the starchier white rice, I added pumpkin puree, and it works like a charm.

To make this healthy risotto you need a handful of ingredients that all play a key role in the overall creaminess and flavor of the final recipe.

How to Make Healthier Risotto

Making risotto is not complicated. It just requires a bit of patience and attention. Now, I’m not an Italian grandmother who learned from her grandmother and has been making it for generations…but this is how I make it. It turns out pretty darn good every single time.

Before I get going on the steps, I recommend deciding on how you want to cook the bacon. Generally I prefer the two skillet method…

But many people prefer cooking their bacon in the oven, which I get! So if you prefer that, you can simply use olive oil instead of the bacon fat. I think this loses some flavor, but it’s easier clean up and low maintenance cooking.

Here is a great guide from Unsophisticook on how to bake your bacon!

That’s it! Serve immediately with a nice loaf of bread or a small salad. Heck, have both!

If this is your first time making risotto, I hope you enjoy it as much as I do. There is something peaceful for me about slowly stirring and watching the grains give in to the broth, creating this amazing creaminess.

Once you’ve mastered the technique, you can apply the ‘risotto technique’ to different grains and sets of ingredients. Get creative! Use barley, wild rice, and see what you like, and what veggies go well with them. Pea and pancetta, lemon asparagus, a mushroom medley – all are great options!

But for now, give this bacon farro risotto a try, and enjoy a creamy, whole grain alternative that you can savor without a lick of guilt.

No. Farro is a wheat grain, so it does contain gluten.

What kind of farro should I buy?

There are a few different kinds of farro, generally whole grain, semi pearled, and pearled. Whole grain packs the biggest nutritional punch, but it also takes the longest to cook. I usually buy semi-pearled because it falls right in the middle.

If you buy pearled, it will cook faster. If you buy whole grain farro, it may take a bit longer to cook, but soaking for 30 minutes first can also help.

Can I overcook the farro?

One of the best reasons for using farro as a replacement for rice is that it is one tough grain to overcook. While rice becomes a broken mushy mess if overcooked, farro takes a long, long, long time to break down like that.

Can I substitute something else for the pumpkin?

If you don’t have or don’t want to use pumpkin puree, you can use heavy cream or double the cheese to lend to creaminess.

What to Serve with Risotto 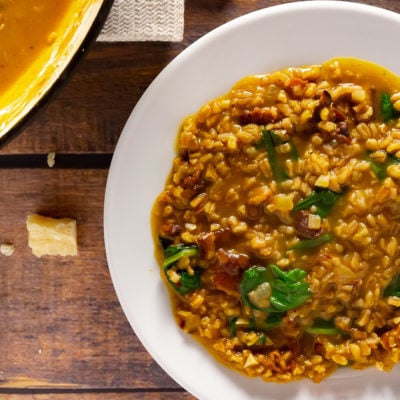 Print Recipe
This is a delicious whole grain risotto that packs a punch of flavor with healthy, tasty ingredients like farro, pumpkin, and spinach, with just a touch of bacon and Parmesan to make it craveable.
Prep Time:15 mins
Cook Time:45 mins
Total Time:1 hr

** You can bake your bacon in the oven as well. Simply replace bacon fat in the recipe with olive oil and crumble bacon when done. 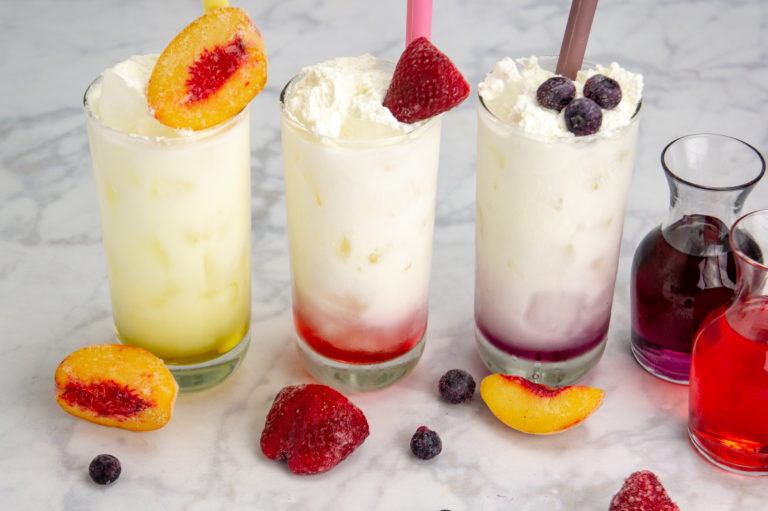 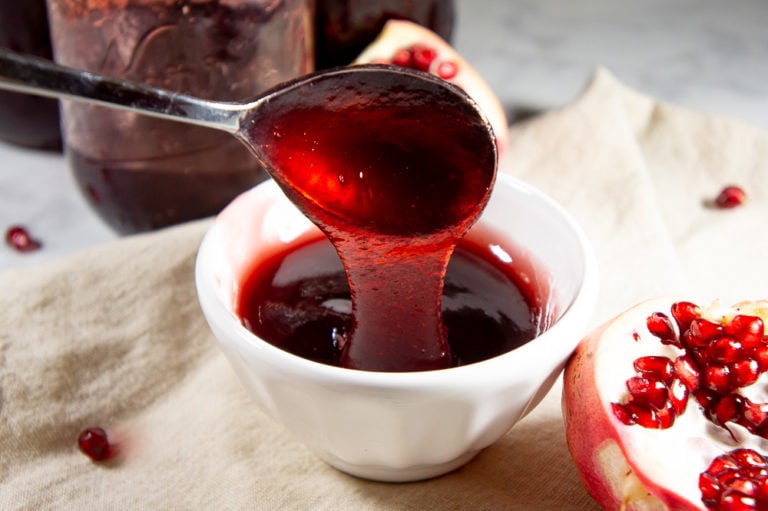 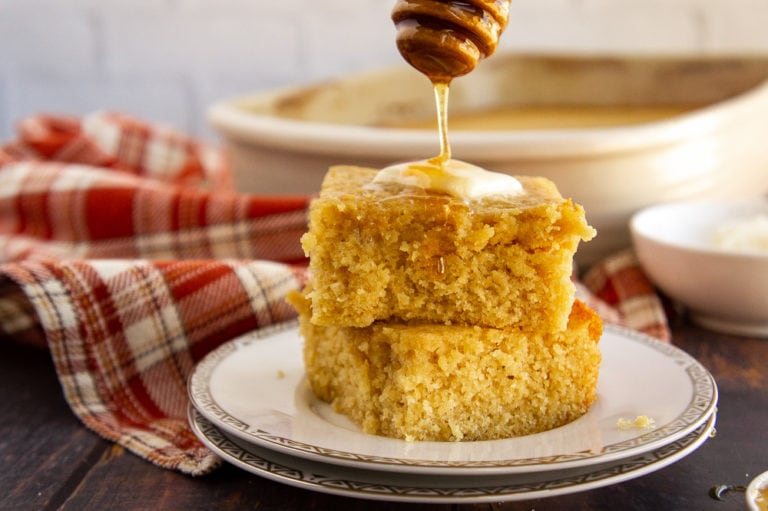 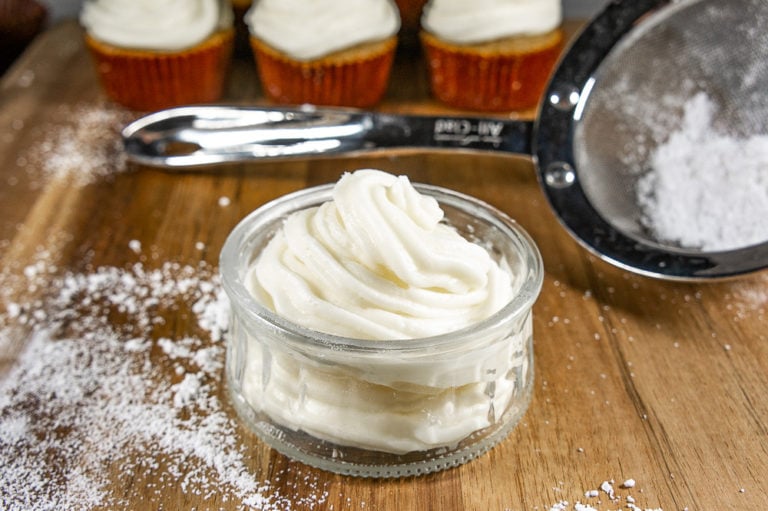 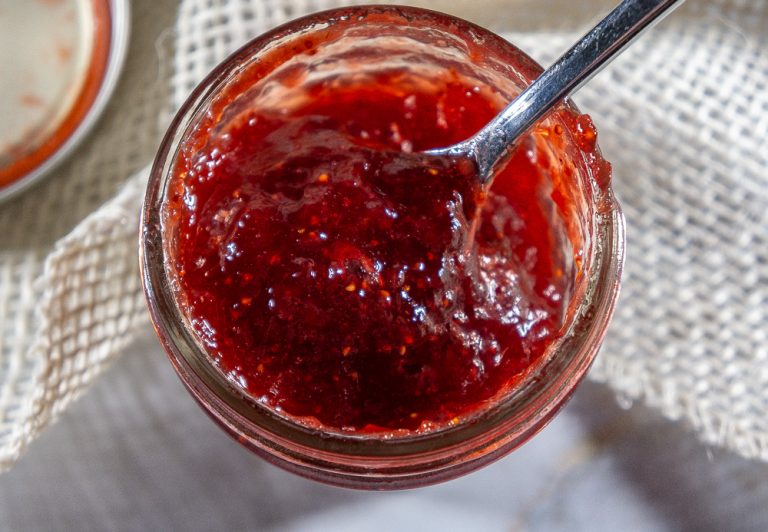 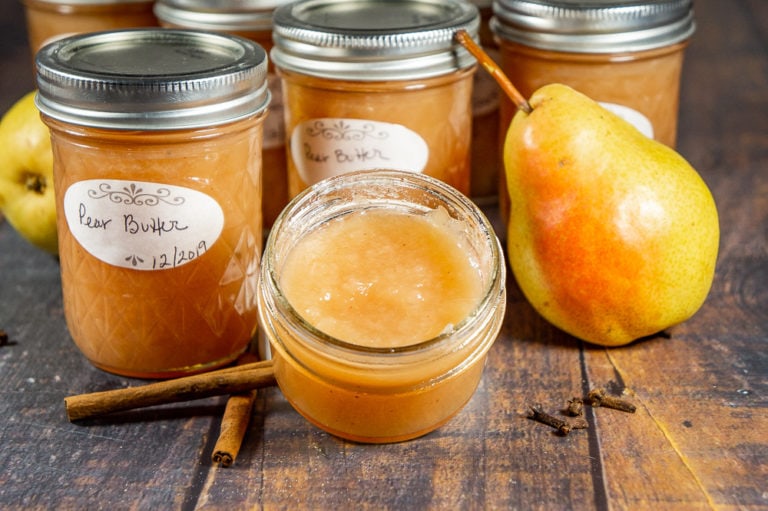 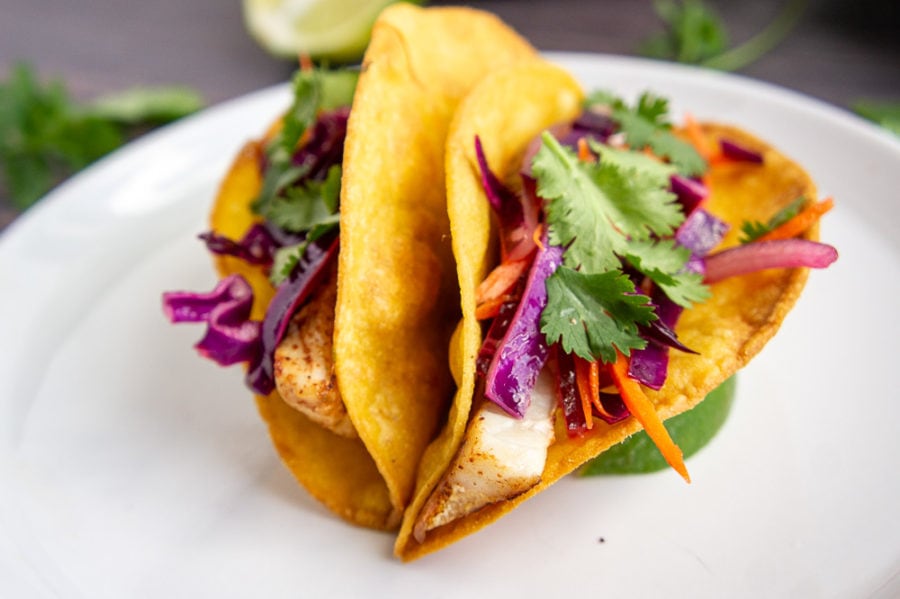 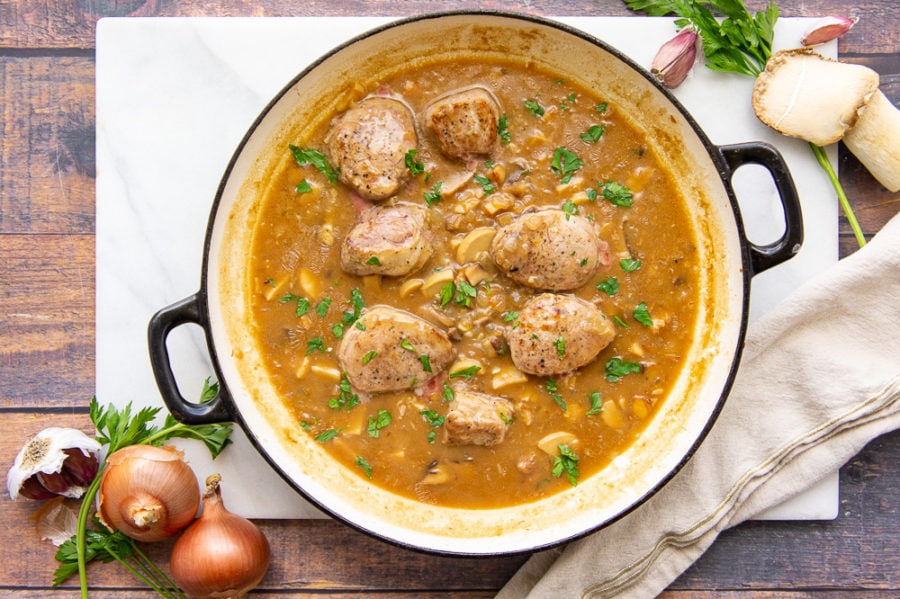 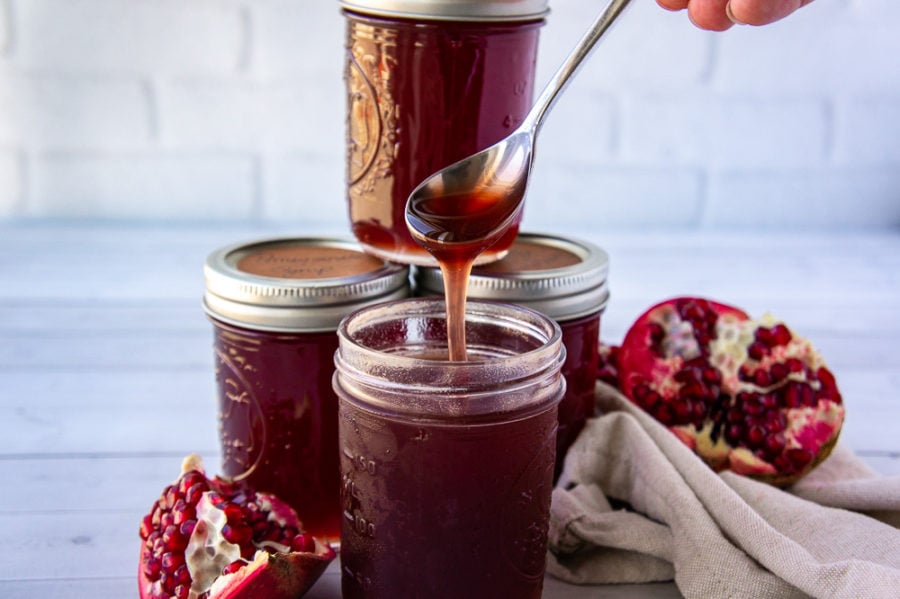 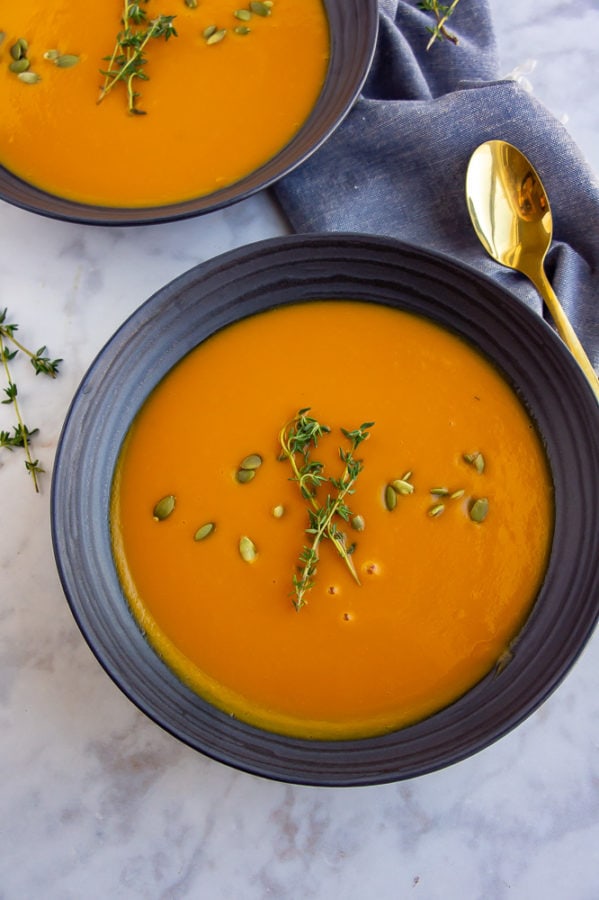 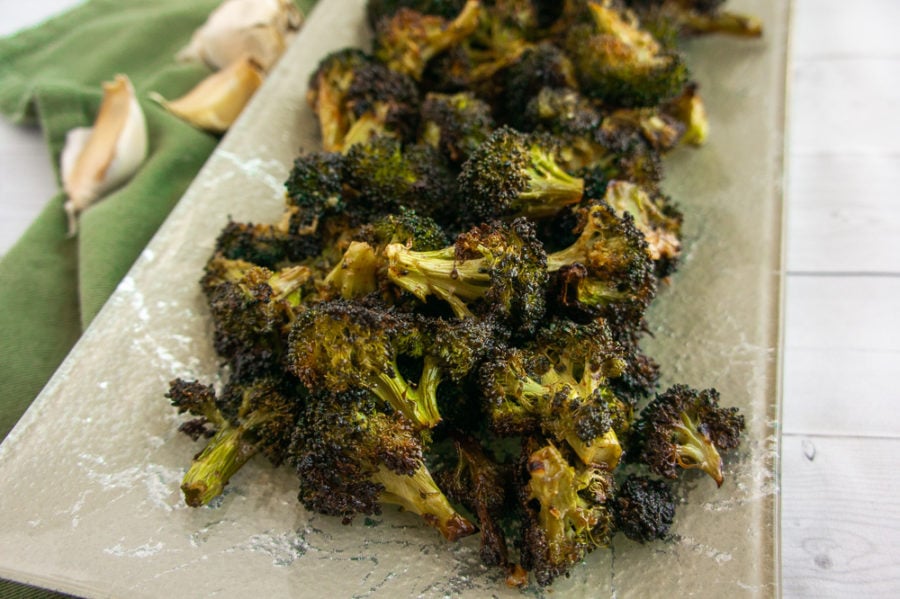 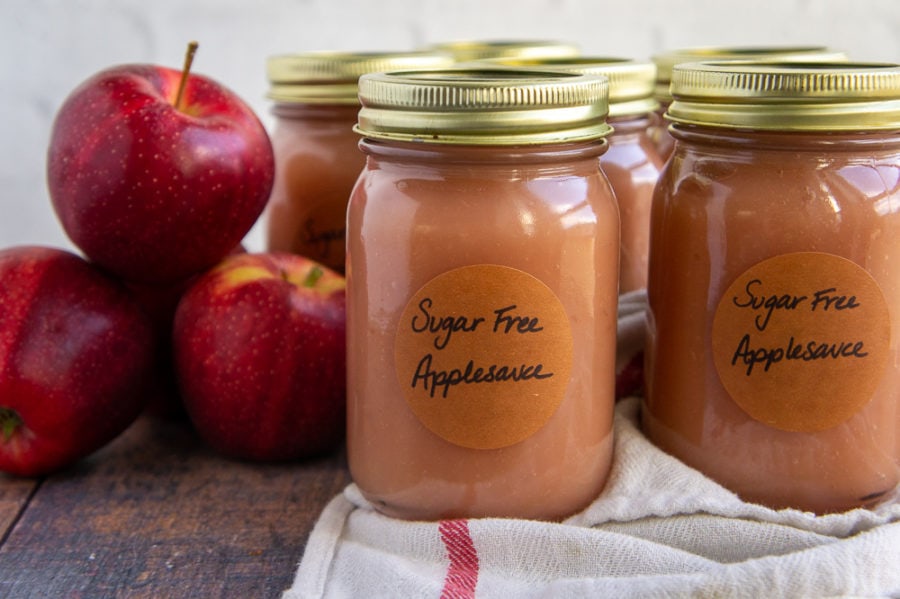